I have been working on replacing some of my couple-year old dog-breed patterns since my current work is a LOT more complex and a lot better (at least I think so! :D )

Replacement Newfie pattern. I saw this guy? girl? at the Medina dog show. Beautiful chocolate brown.. S/he was lying there with a drool towel draped around his/her neck while his people watched the Working group compete. I didn't put the drool towel in the cutting though.. :) 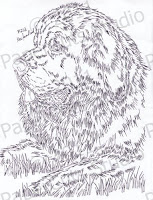 Also a replacement Australian cattle dog. I have had this photo for a while, I think I took it at the 2007 Chagrin Polo Field show, but I am not positive?

And got a pattern done for the beautiful red wolf that I saw on the trip to the Columbus zoo:

I am a cut-paper and woodcarving artist. All my papercut artwork is designed by me and hand-cut with an x-acto knife.

*The content and images on this blog are the property of PaperCuts Studio. Please do not download or distribute any of the pictures or content for personal and/or commercial use. I spend a lot of time, love, and money creating my art, and would be happy to work with you on special requests or custom work. Please help support the arts so that I and others like me can continue creating! Thanks for your cooperation!!*

Work for Sale on Etsy

Promote Your Page Too